My secondment at the Institute for Social Movements, Ruhr University Bochum, Germany. 2-30 June 2017.

The Institute for Social Movements was founded in 1980 as the “Institute for Research on the History of European Workers’ Movements”. It is a central research centre at Ruhr University, directed by Professor Stefan Berger who kindly received me for a month’s research linked to the SPeCTReSS project. Being a researcher on Irish migration studies to South America and having studied the presence of Roger Casement in Brazil (its social, political and literary implications in the construction of cultural traumas), I first asked myself why to choose to do my secondment in Germany. There were two strong reasons: the possibility of doing research at RUB’s specialized library, an inspiring start from an interdisciplinary perspective; and the chance to follow the Irish revolutionary steps of Roger Casement in Germany based on the entries of his diary where he described his stay in Berlin and Limburg during his hopeless mission to raise an Irish Brigade (1914-1916).

RUB’s library has texts on European workers’ movements and important theoretical studies on the representation of cultural trauma as a social construct. I benefited from gathering an extensive bibliography on memory studies, trauma narratives, the transformation of cultural trauma into resilience by indigenous people (native Americans and First Nations cultures; Mexican workers) and on the role intellectuals play as carriers in the construction of cultural traumas. I was also invited to give the lecture “The Amazon Journal of Roger Casement: A Beacon for Social Indigenous Movements” to staff and postgraduate researchers. It was a great opportunity to exchange ideas on indigenous movements and to raise valuable issues that has enlarged my ongoing research. We continued our discussion over dinner with some colleagues and postgraduates which also gave us the chance to plan future links between RUB and the University of São Paulo, mainly with the coming secondments of Pia Eiringhaus and Andrzej Michalczyk who were interested on migration studies. I also met Professor Bernhard Bayerlein who gave lectures in São Paulo the year before during his secondment. I was invited to visit his neighbourhood in Cologne and talk with his friends who are members of the social movement “Now” which has the aim to improve various spaces of the city for the people’s welfare. Their activity resembles the social and political movement called “Buen Vivir” which started and expanded in South America.

To investigate Casement’s presence in Germany I also worked at the library of Cologne University where I found his correspondence to Captain Hans Boehm. Casement spoke no German and Boehm, who was married to an American and had several Irish friends, was assigned by the German High Command to assist Casement while he was in Germany. I also had access to Casement’s writings and followed his track in this city. 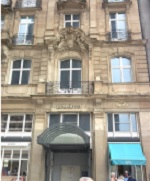 Dom Hotel where Casement used to stay in Cologne. Nowadays it is being restored. 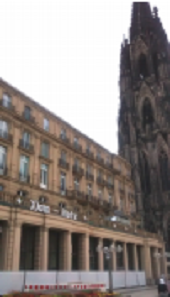 Though my focus of study deals with the period of the Great War, visiting museums and towns where vestiges of World War II are still part of a nation’s cultural trauma helps to understand how radical social transformations have configured cultural traumas and are now reenacted and reinterpreted in different lieux de mémoire. For example, the Cologne National Socialism Dokumentationszentrum is an impressive building: the former Gestapo house prison turned into a memorial and the prisoner’s inscriptions written on the walls of the underground cells express their feelings, describe tortures and the counting down days before being executed in the backyard. This small backyard has been artistically refurbished. It’s an empty space with mirror-walls that when the visitor, after walking through the cells and steps into the outside, confronts her/his own image with an expression of horror, emptiness and silence. In the main hall, the exhibition of photographs and documents retells the history of the building and its actors from different perspectives reporting counternarratives and actions of resistance at that time. 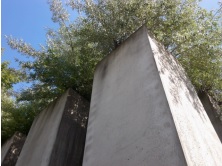 I went to Bonn, the temporary capital of West Germany from 1949 to 1991 and visited the birthplace of Beethoven with an interesting special exhibition, which showed the role that Beethoven-Haus played adopting nazist principles between 1933 and 1945 and explained how the figure of Beethoven was politically appropriated and explored. In Berlin I walked along the perfumed boulevard Unter den Linden (under the linden trees), all in bloom at this time of the year, and I admired the old buildings, Humboldt University, and places that Casement described in his Diary where he had meetings with the German High Command. I also visited places that keep the memory of World War II, such as the Jewish Museum, various memorials, the Wall and its museum, the Topography of Terror and other historical sites. The Jewish Museum is an outstanding modern symbolic building expressing through its architecture all void provoked by exile, the holocaust and the continuity through transgenerational memory. On the other hand, the presence of hope is performed with the growth of olive trees on top of monumental columns in an enclosed labyrinthic yard with an irregular stoned and inclined floor which provoked an unfamiliar strangeness and instability.

My short secondment at Ruhr University, Bochum, allowed me not only to collect data to develop my research project but mainly to learn more about a country whose cultural memory is a mediated and performative engagement with the past and the way its people redefined themselves and learned to connect their own suffering to the suffering of the others. I also experienced how art can record unofficial histories, delve into historical traumas and imagine resilience and other forms of solidarity through different artistic techniques in the various places I visited.

My special thanks to Dr. Jennifer Edmond, the general coordinator of SPeCTReSS Project/Marie Curie International Research Staff Exchange Scheme, and to Professor Stefan Berger who made this enriching experience possible.

Dr Jennifer Edmond, is the Director of Strategic Projects in the Faculty of Arts, Humanities and Social Sciences at Trinity College Dublin. Trained as a scholar of German literature, Jennifer is mostly engaged professionally with the investigation of knowledge exchange and collaboration in Humanities research and in particular the impact of technology on these processes.
View all posts by Jennifer Edmond →
This entry was posted in Uncategorized. Bookmark the permalink.