Posted on February 2, 2018 by Jennifer Edmond 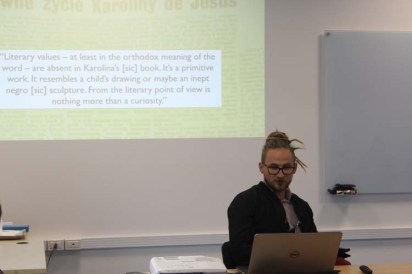 The SPECTRESS network supported my research at the University of São Paulo, Brazil, in August and September 2017. As I work at the Department of Portuguese and Translation Studies, Jagiellonian University, where I explore and teach Lusophone literature and literary translation, during my secondment I focused on contemporary Brazilian novels in which the concept of cultural trauma and post-memory writing, related to migration from the Old World, is presented, reworked and challenged. I spent a lot of time in USP main library and numerous bookstores, looking for the most recent examples of fiction, as well as literary works in general that might be useful in my classes upon my return. I also participated in two scientific events: 3rd Workshop on Internationalization at the Faculty of Education (3 August) and SPECTRESS Symposium “Rethinking Cultural Trauma from Transnational Perspectives” at the Faculty of Philosophy, Letters and Humanities (22-25 August).

I was kindly received by Prof. Laura Izarra from the Department of Modern Letters and my dear friend Eda Nagayama, who had visited my home institution under the SPECTRESS program in 2016. Together with Eda, I have worked on a translation, directly from Polish into Portuguese, of ”Childhood Behind Barbed Wire”, one of the most moving testimonies to the tragic fate of children in the Auschwitz death camp, written by Bogdan Bartnikowski and first published in 1969. The book will be published in 2018 by the Auschwitz-Birkenau Publishing House, proving that SPECTRESS, as an international network of scholars, was able to communicate effectively across languages and cultural spaces. We often had to create new concepts and expressions related to the reality of the death camp, performing a transcultural, rather than simply interlingual translation. Our work will contribute to a more complete understanding of the trauma of the Holocaust by the global Portuguese-speaking community, especially visitors to the Auschwitz Museum.

Even though it was my fourth time in Brazil, it was my first chance to get to know São Paulo better – a heterogenous, gargantuan megalopolis with a stunning cultural offer. In my spare time (which was very limited indeed!) I have practiced Brazilian Jiu-Jitsu, meeting many interesting people from various cultural and economic backgrounds. My stay was fruitful in terms of my development as a scholar, but also as an individual, and I am sure that it will lead to many new scientific enterprises in the future.

Dr Jennifer Edmond, is the Director of Strategic Projects in the Faculty of Arts, Humanities and Social Sciences at Trinity College Dublin. Trained as a scholar of German literature, Jennifer is mostly engaged professionally with the investigation of knowledge exchange and collaboration in Humanities research and in particular the impact of technology on these processes.
View all posts by Jennifer Edmond →
This entry was posted in Uncategorized. Bookmark the permalink.